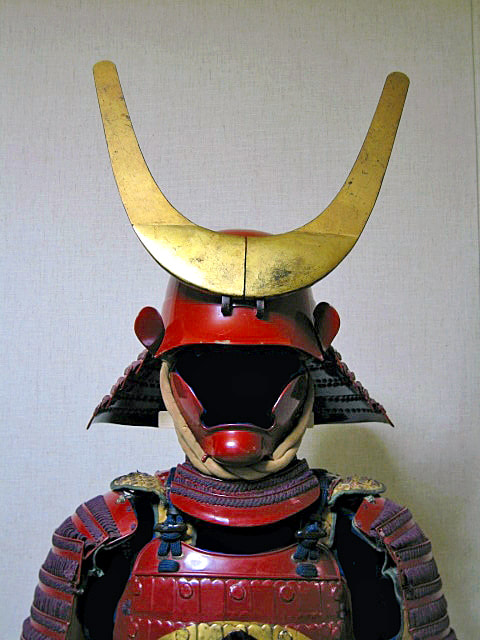 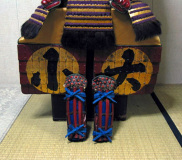 History: The Ii were originally from Tôtômi Province and claimed descent from Fujiwara Yoshikado (ca.850). During the early Sengoku period they fought with the Imagawa in cooperation with Shiba Yoshisato but later became Imagawa vassals.

Naomasa was born in Hôda village in the Inasa district of Tôtômi province and was first known as Toramatsu. He was the only son of Ii Naochika, an Imagawa vassal. Naomasa’s mother was a daughter of Okuyama Chikatomo. Naomasa’s grandfather, Iin Shinano no kami Naomori (1506?-1600) , had first contested the Imagawa’s encroachment into Totomi but later accepted their rule. He was killed at the Battle of Okehazama along with his lord, Imagawa Yoshimoto.

In 1562, Naochika, lord of Iidani Castle, came to be suspected of treason by Imagawa Ujizane, not the first or the last Imagawa retainer to be thus condemned by Imagawa Yoshimoto’s paranoid and inept successor. Ujizane dispatched the Ashina to destroy him in 1562 and this was carried out, although the young Naomasa was hidden away and avoided his father’s fate. He entered the service of Tokugawa Ieyasu, who had taken Totomi in 1569, and at Tanaka (1578) quickly distinguished himself as a brave fighter. Lord now of his family’s traditional residence, Iidani, Naomasa commanded 3,000 men at the Battle of Nagakute (1584) and did great damage to the Ikeda troops he faced there with gunnery fire. Following the Tokugawa transfer to the Kanto in 1590, Naomasa, who rose in rank rapidly despite his relative youth, was given Minowa Castle in Kôzuke province, worth 12,000 koku. At the start of the Sekigahara Campaign, he participated in the attack on Gifu Castle and at the Battle of Sekigahara commanded 3,600 men. In that great struggle he acted as an escort to Ieyasu's son Tadayoshi but managed to draw first blood, outpacing the troops of Fukushima Masanori and attacking Ukita Hideie's contingent. At the end of the fighting he was shot and wounded by a Shimazu sniper as he was attempting to run down the retreating Shimazu contingent. He was therefore unable to personally see to Ieyasu’s instructions that Yamaouchi Kazutoyo be assisted in quelling the erstwhile Chosokabe samurai of Toda Province, instead sending one of his retainers (Suzuk Hyoe.)

Naomasa was afterwards awarded Sawayama in Ômi Province (worth some 180,000 koku) but died in 1602, evidently as a result of his Sekigahara wound. He was noted for dressing his men in red armor, and his contingent was often known as Ii's 'Red Devils' for its fighting spirit (Ii himself was sometimes called 'Akaoni', or Red Devil/ogre). This is said to have been adopted after the Tokugawa took over the Takeda lands and Ieyasu inquired into the tactics Takeda Shingen had employed on the battlefield - which included allowing Yamagata Masakage to dress his men in red for psychological effect. Naomasa was considered one of Ieyasu's great captains and was highly regarded by his master.

Naomasa was succeeded by his eldest son Naotsugu (?-?, also known as Ii Naokatsu), who began construction of Hikone Castle the following year. He refused to fight at Osaka Castle for the Tokugawa in 1614 and was therefore made to step down in favor of his younger brother Naotaka (1590-1659) the following year. Naotaka completed work on Hikone in 1622.

The Ii remained politically important throughout the Edo Period, culminating with Ii Naosuke and his Ansai Purge and assassination in 1859.