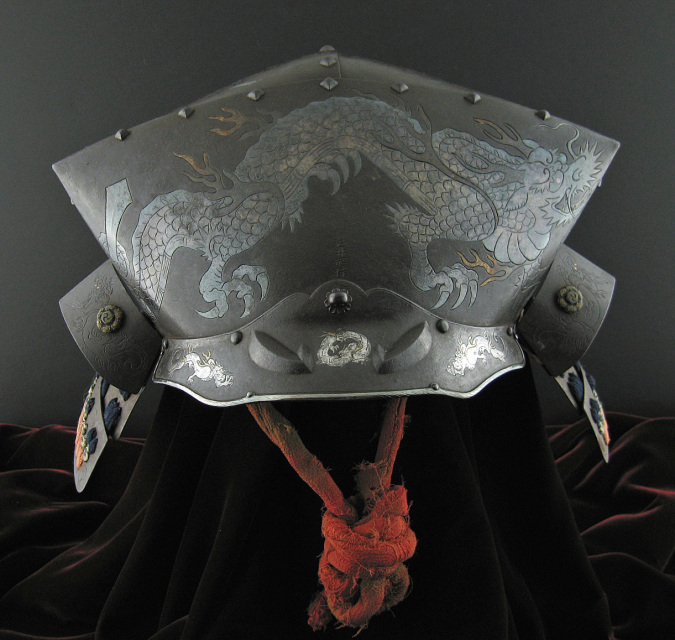 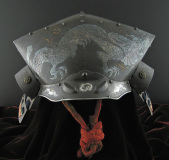 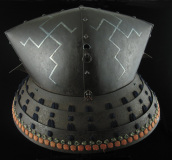 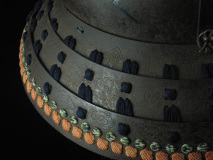 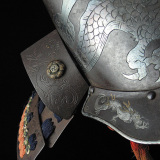 The unusual helmet constructed from two sheets of iron riveted together along a medial crest and hammered into the form of a billowing sack used to hold grain, the front surface carved with a large coiling dragon and the reverse with lightning bolts, all rendered in kebori and highlighted with gold and silver overlays, the mabisashi with a scalloped edge and hammered up with prominent eyebrows, the surface decorated with two small confronted dragons in kebori and silver overlays, the edge fitted with silver rope fukurin, the bowl fitted with a three-lame russet-iron solid-plate shikoro carved with clouds, lightning bolts and Sanskrit manji characters, laced in blue spaced lacing with orange trim on the lowest lame, the top lame terminating in fukigaeshi carved with dragons and applied with gilt and iron mitsudomoe and foliage heraldic crests, signed on the interior of the bowl Negoro shi Fujiwara Yoichi saku and inscribed on the mabisashi Na Ito kore (wo) motsu (owned by Ito)