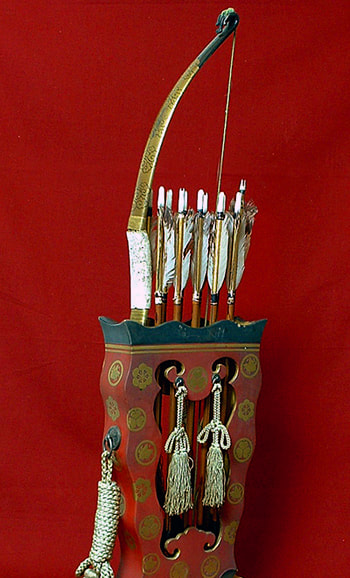 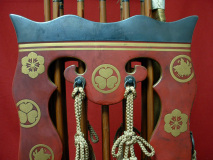 Remarks: It is clear from the craftsmanship and the use of 3 family crests that this set once belonged to a Daimyo. The crests indicate that this belonged to a member of the Ikeda Clan. Signed by Kobayashi Masaoku. This will make a fine addition to any armor collection.

Kago Hankyu are a smaller version of a Yumi Dai. These were to be carried with a Daimyo in a palanquin and could be used in these typically close quarters. These sets are extremely rare and this one is one of the few we have ever seen for sale. This was purchased from a private collection in Japan. This rare set includes shipping, handling and insurance to anywhere in the world.

History: Our extensive research indicates that this important piece belonged to a Daimyo of the Ikeda Clan. The Ikeda of Owari Province were descended from MinamotoYorimitsu (944-1021), whose great-great grandson Yasumasa first took the name Ikeda. In the 16th Century the Ikeda rose to fame as they followed the fortunes of the 'Three Unifiers'. Ikeda Tsunetoshi entered the service of Oda Nobuhide and Tsuneyoshi's son Nobuteru would become a trusted Oda general, as well as a personal friend of Toyotomi Hideyoshi. While Nobuteru would be killed at the Battle of Nagakuta, his son Terumasa would side with Tokugawa Ieyasu in the Sekigahara Campaign and become one of the richest Daimyo in Japan. The Ikeda would remain wealthy Daimyo throughout the Edo Period.

From the dating of this piece we can attribute this piece to Ikeda Mitsumasa, Edo-period lord of Okayama Domain in Bizen Province . Born in 1609 to Ikeda Toshitaka (1584-1616), the previous lord of Okayama Domain. Mitsumasa inherited the title of Daimyo upon his father's death in 1616, but the following year his holdings were drastically reduced as control of portions of his fiefdom was transferred to the domains of Inaba and Hoki (located in present-day Tottori Prefecture). In 1628 Ikeda married Katsuko, daughter of Senhime, who in turn was the daughter of Hidetada, the second Tokugawa Shogun. When Okayama Domain in Bizen Province was placed under direct control of the shogunate in 1632, Ikeda remained de facto lord of the region.

Inquiries: It is our goal at Shogun Armory to provide the finest in rare antique Samurai Armor. We are privileged to serve many collectors, museums and dealers from around the world. If you have an inquiry regarding a specific item please message us.

If you are looking for specific items please let us know as we may already have just what you are looking for. If we don't currently have an item we can certainly locate it for you. We have the best direct sources of antique Samurai Armor in the world working with us.

No exclusive Samurai Armor source anywhere in the world can provide you with a better selection of high quality items. Locating the very best Samurai Armor items is what we do every day. Thank you for taking the time to visit us at Shogun Art. We look forward to hearing from you.